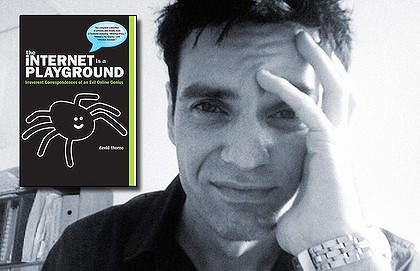 Prankster David Thorne is an internet sensation and has a best selling book, but his reputation for humour has a dark side. Inset: Thorne's best-selling book.

HE’S been called ‘‘the funniest man on the internet’’, but to the objects of his scorn, Australian satirist David Thorne is a cyber bully.

‘‘David is the archetypal internet bully,’’ says software developer Simon Edhouse, who features in Thorne’s "pie chart" web post, which went viral after it was featured on Late Night with Conan O’Brien and The 7PM Project.  ‘‘David’s greatest weapon is his humour.’’

Like many bored employees, Thorne once passed the time writing satirical emails about colleagues and other people who annoyed him. But his website 27bslash6.com has now been turned into a book, The Internet is a Playground, published by Penguin US, which debuted at No.4 on the New York Times non-fiction bestseller list on May 15 this year.

He’s best known for a whimsical email exchange, offering to pay a $233 bill with a drawing of a spider. When that email was posted on his site in November 2008, traffic soared from several hundred visits a day to half a million, and the post became fodder for David Letterman’s show.

Though the spider email exchange may be real, it uses a stock photograph and a generic, untraceable name, ‘‘Jane Gilles’’. But former colleagues from advertising agency Demasi Jones, whose real names and faces are used throughout Thorne’s website and new book, say they have been hounded by his fans, many of whom believe that every word is true.

His former boss, Thomas Demasi, says former colleagues ‘‘have suffered depression, extreme anger ... the first thing anyone does is google you’’.

‘‘I’ve asked David to take this stuff down,’’ says Mr Thaller, who features several times on Thorne’s website — including one post photoshopping his head onto  a story about a Nigerian sex scam.

Indeed, a quote from Mr Thaller — ‘‘I’m getting your website banned as we speak’’ — is included among the blurbs from The Guardian, Wired and The Sydney Morning Herald on  Thorne’s website.

‘‘I’ve been to the South Australian police and they say there’s nothing they can do,’’ says Mr Thaller. ‘‘Lawyers say it’s just a small case, but to me it’s a pretty big thing.’’

Mr Thaller moved interstate and started work at a courier company. ‘‘But after six months, my manager hauls me in the office, saying, ‘What’s this, what’s this? This harms our name.’’’

It’s often difficult to explain, says Mr Thaller, as ‘‘the older generation don’t believe people would do this stuff’’.

He worries that when he starts a family with  his fiancee, ‘‘are my kids going to find all this made-up stuff about their dad? This is why people commit suicide. The first year I was pretty distraught. I’m a bit better now, I’ve learned to move on. But you know it’s always there.’’

Victorian barrister James Catlin, who regularly advises bloggers on potential defamation liabilities, says the posts about Mr Thaller ‘‘are quite vicious and would upset anybody’’. In Mr Catlin’s view, these posts are potentially defamatory.

‘‘It is a mistake to think that satire is always a defence. Material published as a joke and understood  by those who read it to be so is not defamatory; but serious allegations of fact lying behind a joke may be.’’

Asked by email why he uses real names and photos, Thorne told The Age that ‘‘the email articles are verbatim although I do fix spelling errors, as is my prerogative, and bad grammar prior to posting. I sometimes change the person’s name or remove their second name, unless they have overly annoyed me ...The non-email-based articles feature people I know and are exaggerated but based on actual events.’’

Thorne did not respond to further emails asking him why he kept the real names of his former colleagues.

The name of  Thorne’s website ‘‘is a vague reference to Orwell’s novel Nineteen Eighty-Four — which he wrote while living in 27B on floor 6 of his apartment building in London’’, Thorne said in his email. ‘‘Although what I write isn’t making a statement as grand as Orwell’s, the site is an outlet for dealing with my own minor Orwellian nightmares.’’

But some of those named on Thorne’s website say they have been living their own Orwellian nightmares. If Thorne were posting on a social media website such as Facebook, his subjects could ask the administrators to take down posts they considered abusive. But Thorne’s site is hosted in the US.

For a man with a big web presence, he keeps a low real-life profile. He has conducted all interviews to promote his new book via email (the Oprah interview on YouTube is a spoof). He now lives in Virginia with his wife, Holly Thorne, an American he says he met when they both attended a NASA holiday camp for adults.

Legal experts say that even if Thorne and his website were still based in Australia, local privacy and cyber-bullying laws may not apply.

‘‘In my view, it is a good thing for the author that he now lives in America as pursuing him will be harder,’’ says Mr Catlin.

‘‘There’s still no real clear legal or social norms surrounding that kind of conduct,’’ says Peter Black, a senior law lecturer at the University of Queensland who specialises in internet law.

‘‘It’s cases like this that are legally murky that ask lots of questions.’’

Looking at Thorne’s site ‘‘made me uncomfortable’’, says Mr Black, ‘‘but I don’t think it reaches the level of criminal defamation’’.

Cyber-bullying is an offence under ‘‘Brodie’s Law’’, recently passed in Victoria to allow criminal sentences for workplace bullies. The South Australian Attorney-General has said he intends to make it a crime to upload humiliating and degrading images of a person without their consent. And the federal government’s joint select committee on cyber safety has just tabled a report calling on the Attorney-General to undertake a review of Australian cyber-crime legislation both federal and state-based.

But the emphasis of the proposed federal reforms — and the vast bulk of the current research —  focuses on  the cyber-bullying of children and teenagers.

Employers have been successfully sued under the doctrine of ‘‘vicarious liability’’ when their employees have harassed other employees in the workplace — Queensland Health had to pay damages to a woman who received pornographic and abusive emails from a colleague. But nobody is known to have sued an employer in Australia for abusive content posted by employees on external websites after hours.

But what of people abused or mocked by a vengeful ex, a former friend or a stranger?  Public figures such as newsreader Jacinta Tynan, anti-porn campaigner Melinda Tankard Reist and 2010 MasterChef contestant Joanna Zalm have been easy targets for anonymous abuse. But even those with no public profile may find themselves at the receiving end, with full photo and name.

‘‘Even hurtful abuse may be perfectly legal,’’ says Mr Black.

Mr Edhouse says he was bombarded with thousands of abusive emails, tweets and comments after Thorne uploaded the post "Please design a logo for me. With pie charts. For free" in November 2009.

‘‘Guess what, buddy,’’ read one YouTube comment, ‘‘your email story has been read by millions and millions of people and your reputation is in the toilet.’’

Mr Edhouse denies that the email exchange ever took place. He furnishes a copy of a receipt for $200 for the only work he says he ever commissioned from  Thorne, a corporate logo.

After running his business ‘‘in stealth mode’’ throughout 2010, Mr Edhouse has just started rebuilding his web presence. ‘‘Every time people google my name, they read this and immediately question my integrity. I tried to lay low, but now I feel like staring him down. Otherwise, I’ll spend my whole life afraid of this idiot.’’

In an email to The Age last night, David Thorne said that most of his colleagues told him they didn't mind being on the website. He insisted the email exchange with Mr Edhouse was verbatim.

The former colleagues from Demasi Jones have all chosen to lie low until now, taking down their Facebook pages, refusing to respond to questions about Thorne. But Mr Black says the best strategy for people who feel they have been abused on someone else’s website is to  ‘‘maintain your own online profile as a strong online presence so the first hits that emerge are the things you have created. It’s more productive than commenting directly on the situation. I don’t think it’s easy. But you can’t control what other people do. You have to be prepared to maintain your own identity.’’

Thorne, who worked as design director at Demasi Jones for nine years, is proud of his talent to annoy. He told The Age that he started out writing on forums ‘‘but was constantly having run-ins with moderators. Some moderators have a sense of humour and take on the role of guide among collaborators. Others see themselves as teachers among children and, charged with the godlike power of single click censorship, smite those colouring outside the lines.’’

His internet pranks have included pretending to be an old lady on a knitting forum who is mugged mid-post, pretending to be a restaurant manager in order to offer a free meal to a woman who complained about service on a review site and, most recently, faking a newspaper advertisement offering a free snowboard to the first 500 people to call the number of a sports shop that refused him a refund for a pair of snow gloves.

Australians have a long tradition of pranking, from The Chaser’s political stunts to Barry Humphries’ infamous ‘‘sick bag’’ airline joke.

Thorne regularly cites Chris Lilley as ‘‘one of my favourite Australian writers’’. But he doesn’t think he’s a prankster.

‘‘Pranking is more about stating ‘ha, got you’, whereas I tend to go the ‘yes, but ...’ route,’’ he wrote to The Age. ‘‘I was labelled ‘an idiot with an occasional vague point’ once, which I quite liked. The term ‘troll’ is also thrown around a lot but is technically someone who posts inflammatory, extraneous, or off-topic messages with the primary intent of provoking other users into a desired emotional response. Which I will admit to, but like to think my efforts are without ill intent and constructed to amuse rather than disrupt.’’

Pretty much everyone agrees that Thorne is funny. Even his former colleagues. ‘‘He is incredibly talented,’’ says Mr Edhouse. ‘‘But his readers need to realise we’re not fake people, we’re all real.’’

‘‘I wish him well. He’s a talented writer and can be nice when he wants to be. We simply want to move on with our lives,’’ says Mr Demasi. ‘‘In plain English, who wants to be made a complete mockery of with false made-up stories in a lawless environment, that indirectly destroys a career that has taken 20 hard years to build? Regardless of what your opinion of it is. Humour born of someone else’s humiliation is just easy humour.’’

Mr Thaller says: ‘‘It would work just as well if he could at least make up the names and the photos. I went along with it for a little while but then I’d say ‘enough is enough’. It’s not funny any more.’’